Tuesday, 17 September 2019
In August the sales of sunflower increased four times
In August of that year the Russian agricultural companies have implemented 126,8 thousand tons of sunflower, which is four times more than in August 2018. The Agency said Grain Online, citing Rosstat. 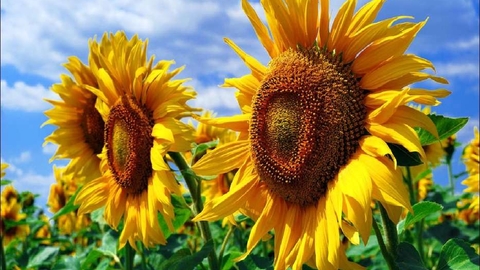 For all the 2018/19 season (August-July) Russian agricultural companies shipped 7.24 million tonnes of sunflower, which is 15% more than in the previous season.

The increase in shipments was due to record harvest.

Последние новости
12:35 The company presents the tractor 75th anniversary of the great victory
12:06 The Ministry of agriculture: about intervention you can forget
11:03 Farmers of Tatarstan for the year sell meat and milk 8.4 billion
10:09 John Deere celebrated the 15th anniversary of the plant in Orenburg
09:03 The President of the NRA of the Roots of bizdev: Tatarstan increased by 30% the insurance of winter crops
08:08 Party trailers Rostselmash will be sent to Tunisia
17:07 The rating of regions of Russia by revenue and farm income sectors
16:02 The company "Umalat" released packaging in the new brand design Unagrande
15:09 The volume of investments in the expansion of production machinery Rostselmash will be 17 billion RUB. for 5 years
14:03 NESPRESSO OPENS YOUNG TALENTS OF CINEMA AND TALKS ABOUT THE CYCLE OF GOOD
13:03 NSA is consistently expanding the application of space-based monitoring tools
12:06 The Ministry of agriculture of Russia praised the work of Acron Group
11:09 Experts BIP: changes in the patent system of taxation will have a positive impact on the development of farming
10:04 Maize hybrid Pioneer® set a new world record for productivity
09:32 The monthly survey of grain market
All news