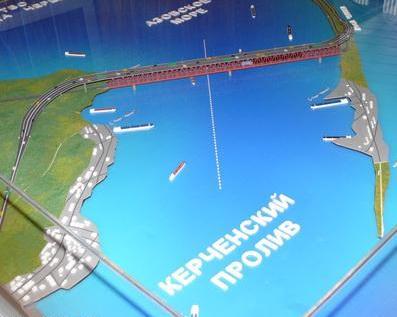 The construction of a bridge across the Kerch Strait dangerous because in its further operation may be complicated by adverse weather conditions, so foreign corporations offer to create a tunnel, which will be cheaper bridge, said the Deputy Chairman of the Council of Ministers of Crimea, the Plenipotentiary representative of the Republic of Crimea under the President of the Russian Federation Georgy Muradov, reports RIA Novosti.

It was planned that the bridge across the Kerch Strait will be built in 2018-2020, According to the project, the cost of which amounted to more than 228 million, the bridge was supposed to consist of a four-lane road crossing and two railway tracks. Deputy Prime Minister Dmitry Kozak said that the construction of transport crossing through the Kerch Strait is scheduled to begin this fall, a number of Russian and foreign companies have already declared their readiness to proceed to construction of the bridge. Already in June of this year, YouTube has a video about the future of the transport passage between mainland Russia and the Crimea, prepared, in all likelihood, the state company "Avtodor". In August, Russian businessman Gennady Timchenko said about the readiness to build a tunnel under the Strait of Kerch 40 billion rubles.

According to the Chairman of the Council of Ministers of Crimea, the authority received proposals from Chinese, canadian corporations, building a tunnel and bridge crossings around the world.

"They're four or five years are already working in this direction and clearly tell us that the bridge building there just dangerous, because at least the month of the year, the individual periods, will not work because of the storm winds, icy rains in the wintertime," said Muradov at the round table devoted to the socio-economic development of the Crimea and Sevastopol, in the state Duma.

Alternative bridge is a modular, flexible tunnel, which is the upper tunnel depth in sandy soils", the value of which may be 60-80 billion, which is much cheaper than building a bridge.

"This topic has, I think, is not closed. We're quite lively discussions with the Ministry of transport of the Russian Federation, the Federal road Agency. I think that will lead to the correct, General conclusions", - said Muradov.