Wednesday, 29 May 2019
Floating dairy farms will appear in the UK?
Young British farmers have organised an excursion to the floating dairy plant in Rotterdam immediately after opening. 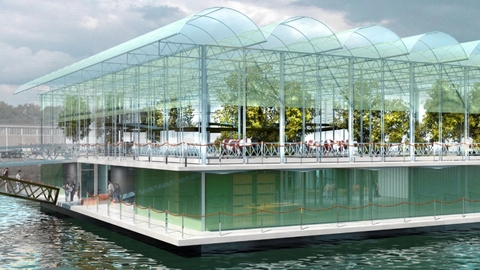 Being the first visitors of the floating farms, a group of twenty young farmers and to get acquainted with the role of the creative decisions play in agricultural marketing. The young people tried to milk one of the first bottled batches produced at the plant. And it seemed to them extremely tasty. Such is the power of positive emotions...

Floating farm in Rotterdam will produce 800 liters of milk a day. British farmer and Chairman of NFU Scotland's Next Generation Colin Ferguson said that "the Dutch innovation" was really inspiring.

"The project was more a proof of concept rather than a fully commercial enterprise, but it is clear that it caused a positive discussion and excitement in the city, with emphasis on the problems of dairy farming. Therefore, the farm has coped with its task to increase the value of the industry in the eyes of the public," said Ferguson.

"It would be possible to imagine something similar in any of our cities in the UK," he said.

Floating farm was not the only place that called for the British located in Umbria, Agriturismo. They visited the poultry farm with neutral carbon emissions and toured a pig breeding business, where pigs graze in the meadows with proximity to the consumer, so that people understand the value of organic food and why they should not be cheap.

Ferguson noted that such exchange of experience is crucial. During the tour, farmers saw for themselves how innovation can "transform and challenge the" traditional farm practice and engage urban consumers "meaningful and transparent" way.

"The consumer will always stand for cheap food, and we, as farmers, have the responsibility to share our stories and increase the value of our supply chain", he added.

Co-organizer of the trip, co-Director Jane Craigie and founder of the project "Youth in rural areas", said communication and innovation is the best way of combining the town and village.