Thursday, 04 July 2019
Grains and pulses in Belarus will need to remove from more than 2.2 million hectares
The Ministry of agriculture and food of Belarus approved the working plan on carrying out harvesting of grain and leguminous crops in 2019. 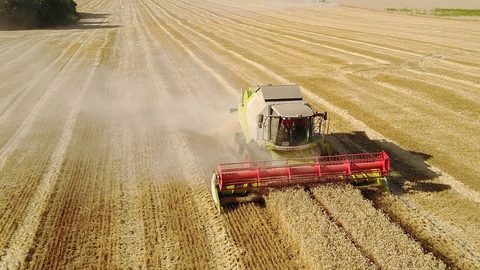 The document is available on the official website of the Ministry.

Based on the planned harvesting areas of grains and the availability of technology, the load on the combine harvester 1 would amount to 256 thousand hectares, at harvest of oilseed rape and colza - 88 ha.

According to the Ministry of agriculture, for the harvest has 2577 units of grain cleaning and drying complexes and over 1.3 million free-standing dryers. Their total capacity amounts to 631 thousand tons of grain per day (full day planned in recent years, 375 thousand tons).

According to estimates of the Ministry of agriculture, the demand for diesel fuel during the harvesting of grain and leguminous crops (July-September) is 263,3 thousand tons, petrol - 17 thousand tons, motor oil - 10,6 thousand tons of furnace oil – 14.5 thousand tons. Required to purchase it Br543,9 million

The security of the agricultural organizations of the Republic of machine staff on the eve of the harvest amounts to more than 34 thousand people, or 88% of the demand. To meet the full requirements will be further raised for cleaning work of industrial enterprises, educational institutions and other works in the farms of about 4.8 thousand machine operators.

At the same time, because of the drought in may-June, possible adjustments in these plans.

New crop the Ministry of agriculture has not yet been announced.

Последние новости
11:00 BayArena will be held in digital format
10:02 Farmers exceeded the plan of sowing of spring wheat and corn
09:09 What equipment is not enough Russian grain producers?
08:06 Weekly market review pork and poultry meat for 21 weeks
17:01 Government grants help develop the whole sector of organic matter
16:04 Leading experts in the field of agriculture have confirmed their participation in "Agroexposiberia", the organizers are stepping up the training
15:07 Priority Breeding and seed center
14:06 Fishering Service, Hampidjan and Tufropes confirmed their participation in the IV Global Forum Fishery & Seafood Expo Russia
13:01 AGCO-RM set tractors Massey Ferguson® KFKH "Russian field"
12:04 Completed construction of the largest Elevator in the Tula region
11:01 Case IH offers the upgraded versions of the machines for application of fertilizers Nutri-Placer 930 to increase the efficiency of Russian farmers
10:00 Rosselkhozbank forecasts reaching its limit on rural mortgages in June
09:04 Freight report, 22 week 2020
08:00 CLAAS: PRACTICAL GUIDELINES FOR THE PREPARATION AND OPERATION OF FORAGE EQUIPMENT
17:03 The soil moisture monitoring and yield prediction using soil sensors
All news