Thursday, 12 September 2019
On fields of Stavropol territory started sunflower harvesting
Average at the edge of the yield of oilseeds to 18.6 quintals per hectare. 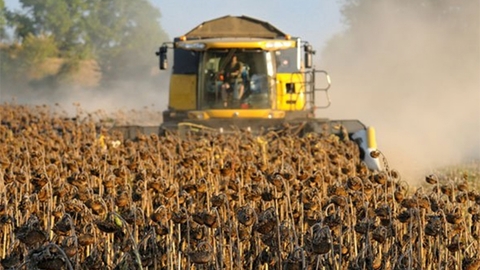 On the fields of the Stavropol territory started sunflower harvesting. It is reported by the correspondent of TV channel "My TV".

"The year was tough and dry. We have rain went after the sunflower withered. So the middle we have an empty,” — said the chief agronomist of the farm Eugene Chursinov in conversation with the correspondent.

In one of the farms Shpakovsky district sunflower sown about a third of the land — 650 hectares. The yield of the fields reaches to 15 tons per hectare. In the region, according to the Ministry of agriculture, sunflower sown 285 thousand hectares in Stavropol fields. Cleaning has already started in 8 districts and urban districts of the Stavropol territory. The average yield on the fields to 18.6 quintals per hectare.

Most seeds per hectare removed in the Izobilnensky district. There the yield reaches 25.6 quintals per hectare.

Последние новости
17:09 Russia: on April 8, spring cereals planted on an area of 2.9 million hectares
16:06 The exhibition "Agroprodmash-2020" will help businesses in the regions
15:04 Market without fine-tuning. Quota, duty and traceability — how the government regulates the agricultural markets
14:00 21 may 2021 in the city of Krasnodar will be "the Russian forum the farmers"
13:08 The number of sentences in the catalog of "the Baltic leasing" has increased by 30%
12:03 Weekly oilseed market from April 6
11:00 TECHNONICOL will begin production of substrates in Tatarstan
10:05 Freight report, week 14 2020
09:09 Russian agricultural Bank 31% increased lending seasonal work
08:06 Shipbuilding and ship-repair enterprises Skipskompetanse, Zamakona Yards, "Shipbuilding Corporation "AK bars" and "technology Center of shipbuilding and ship repair" will be the new participants of the IV Global Forum Fishery & Seafood Expo Russia
16:00 Weekly review of the sugar market as of April 3,
15:07 Grape hi-tech
14:09 NSA urged its members not to restrict the work of relevant departments and branches of the agricultural insurance
13:07 TESTED AND PROVEN: SENSOR CLAAS NIR SENSOR DETERMINES THE MOISTURE UBRANI MASS WITH LABORATORY ACCURACY
12:02 APH "ECO-culture" — fresh vegetables to support retirees on social security
All news