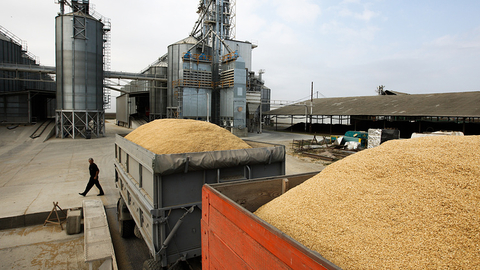 "This year, it made decisions about the sale of 2 million tons of grain. The first 500 thousand tons have already been sold for export only. It was the old crops, in fact we got rid of the grain, which was stored since 2010. Was first used the mechanism of the sale through the stock exchange", — said Yuriev.

According to him, the first batch of grain exported to 20 countries, and the next batch will go for export and milling enterprises and producers of animal feed in the Russian market.

"We started to accredit bidders. By order of the Ministry of agriculture of the Russian Federation, we will deliver weekly to 50-100 tonnes on the Russian market. Grain prices will decline as we sell grain from Federal intervention Fund", — said the Deputy Director of UGC.

He mentioned that the drought this year reduced the grain harvest by regions in average by 25%, but the losses will cover last year's record harvest. The prices for bread will not grow, as the rising cost of flour used in bread baking, will not exceed 20%, which will allow the price of bread to remain at the same level.

Последние новости
09:03 The HARVEST 2020: on July 14 and produced 24.6 million tons of grain
08:08 The export of Russian agricultural machinery in 5 years increased more than 3 times
17:07 The agriculture Ministry submitted to the government a draft law on "green products"
16:02 Kraft Heinz has released kits for making ice cream with the taste of sauces
15:09 Prices for Russian wheat rose for the week to $203 per ton - experts
14:42 "Baltika" and environmentalists Taganrog will increase collection of packaging for recycling
14:02 A new company has joined the voluntary Code of obligations of producers of soft drinks
13:05 The Ministry of agriculture intends to transfer all the services into electronic form
12:06 Corteva Agriscience will demonstrate the results of implementation of precision agriculture technologies in the framework of Agrochemie pioneer-2020
11:08 The Department of agriculture maintains a YouTube channel about the development of Tambov APK
10:02 Rostselmash has created a center for the development of world-class projects in the field of digitalization APK
09:04 Called the number harvested of grain in Russia
08:00 "Black CA" appeared on the market of organics
16:02 Industry-production of edible insects is a lot of uncertainty and dreams
15:03 The agricultural sector lacks funding
All news